From November 1 – 3, 2012, I attended the PLOS Article Level Metrics Workshop in San Francisco .

PLOS is a major open-access online publisher and the publisher of the leading megajournal PLOS One. A mega-journal is one that accepts any scientifically sound manuscript. This means there is no decision on novelty just a decision on whether the paper was done in a scientifically sound way. The consequence is that this leads to much more science getting published and the corresponding need for even better filters and search systems for science.
As an online publisher, PLOS tracks many what are termed article level metrics – these metrics go beyond of traditional scientific citations and include things like page views, pdf downloads, mentions on twitter, etc. Article level metrics are to my mind altmetrics aggregated at the article level.
PLOS provides a comprehensive api to obtain these metrics and wants to encourage the broader adoption and usage of these metrics. Thus, they organized this workshop. There were a variety of people attending (https://sites.google.com/site/altmetricsworkshop/attendees/attendee-bios) from publishers (including open access ones and the traditional big ones), funders, librarians to technologists. I was a bit disappointed not to see more social scientists there but I think the push here has been primarily from the representative communities. The goal was to outline key challenges for altmetrics and then corresponding concrete actions that could place in the next 6 months that could help address these challenges. It was an unconference so no presentations and lots of discussion. I found it to be quite intense as we often broke up into small groups where one had to be fully engaged. The organizers are putting together a report that digests the work that was done. I’m excited to see the results. 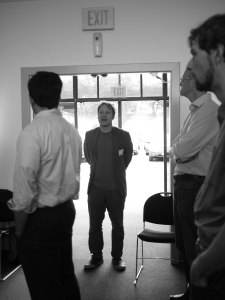 Me actively contributing 🙂 Thanks Ian Mulvany!

Associated with the workshop was a hackathon held at the PLOS offices. I worked in a group that built a quick demo called rerank.it . This was a bookmarklet that would highlight papers in pubmed search results based on their online impact according to impact story. So you would get different color coded results based on alt metric scores. This only took a day’s worth of work and really showed to me how far these apis have come in allowing applications to be built. It was a fun environment and was really impressed with the other work that came out.