I was invited by to do a webinar for Elsevier Journal Editors on Altmetrics this past Tuesday. You can find the complete recording here.  260 people attended live. The best part probably was the Q/A session starting 33 minutes in. Broadly, I would broadly characterize the questions as: “I really would like to use these but can you give me some assurances that they are ok.”  Anyway, have a listen for yourself. Hannah Foreman did a great job of directing (she also brought me a cake for my birthday!). I also thought it was great to see Mike Taylor doing a demo of ImpactStory. I felt this was an important webinar to do as it reaches a traditional journal editor audience that may have not yet fully gotten on board. A final note, thanks to Steve Pettifier for letting me use him as an example.

I think since I’ve moved to Europe I’ve been attending ESWC (Extended/European Semantic Web Conference) and I always get something out of the event. There are plenty of familiar faces but also quite a few new people and it’s a great environment for having chats. In addition, the quality of the content is always quite good. This year the event was held in Montpellier and was for the most part well organized: the main conference wifi worked!

So what was I doing there:

The VU Semantic Web group also had a strong showing:

I’ll try to pull out what I thought were the highlights of the event.

What is a semantic web application? 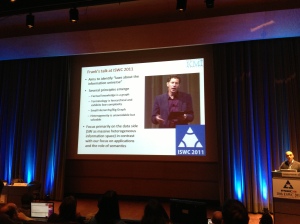 Can you escape Frank?

From what I could gather, Motta would define it as an application that is scalable, uses the web and embraces Model Theoretic semantics. For me that’s rather limiting, there are many other semantics that may be appropriate… we can ground meaning in something else other than model theory. I think a good example of this is the work on Pragmatic Semantics that my colleague Stefan Schlobach presented at the Artificial Intelligence meets the Semantic Web workshop. Or we can reach back into AI and see discussion’s from Brooks’ classic paper Elephant’s Don’t Play Chess.  I felt that Karger’s definition (in what was a great keynote) was getting somewhere. He defined a semantic web application essentially as:

An application whose schema is expected to change.

This seems to me to capture the semantic portion of the definition, in a sense that the semantics need to be understood on the fly. However, I think we need to role the web back into this definition… Overall, I thought this discussion was worth having and helps the field define what it is that we are aiming at. To be continued… 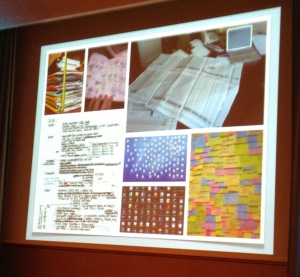 As I said, I thought Karger’s keynote was great. He gave a talk within a talk, on the subject of homebrew databases from this paper in CHI 2011:

They define a homebrew database as “an assemblage of information management resources that people have pieced together to satisfice their information management needs.” This is just what we see all the time, the combination of excel, word, email, databases and don’t forget normal paper brought together to try to attack information management problems. A number of our use cases from the pharma industry as well as science reflect essentially this practice. It’s great to see a good definition of this problem grounded in ethnographic studies.

The Concerns of Linking

There were a couple of good papers on generating linkage across datasets (the central point of linked data). In Open PHACTS, we’ve been dealing with the notion of essentially context dependent linkages. I think this notion is becoming more prevalent in the community. We had a lot of positive response on this in the poster session when presenting Open PHACTS. Probably, my favorite paper was on linking the Smithsonian American Art museum to the Linked Data cloud. They use PROV to drive their link generation. Essentially, proposing links to human’s who then verify the connections. See:

I also liked the following paper on which hardware environment you should use when doing link discovery. Result: use GPU’s there fast!

Additionally, I think the following paper is cool because they use network statistics not just to measure but to do something, namely create links:

APIs were a growing theme of the event with things like the Linked Data Platform working group and  the successful SALAD workshop. (Fantastic acronym). Although I was surprised people in the workshop hadn’t heard of the Linked Data API. We had a lot of good feedback on the Open PHACTS API. It’s just the case that there is more developer expertise for using web service apis rather than semweb tech. I’ve actually seen a lot of demand for Semweb skills and while we our doing our best to train people there is still this gap. It’s good then that we are thinking about how these two technologies play together nicely.